My mom and I just flew to Ireland to plan for my wedding in September! Omg, pinch me moment. When we made our flight reservations a few months back, I remember thinking traveling from Wednesday to Sunday for a trip to Europe felt a little quick. As the days grew closer and I started telling people that I was “flying to Ireland for the weekend” and was met with semi-shocked looks, I started getting really concerned that flying that far for 5 days was going to crush me. Turns out, I crushed jet lag and I’m going to tell you how to do it!

I’m 7 hours behind Europe so I do think all of you East Coasters have a bit of a leg up, but all of this still applies when flying to Europe from the States.

1. Get A Head Start on Bedtime

Starting a few days before my flight, I forced myself to go to bed earlier than normal to get a head start on a new sleeping schedule. I usually go to bed around 10pm so I made myself crawl into bed around 9pm and took a CBD pill to help me just chill. Even if you aren’t tired, read a book or just lay there – don’t scroll on your phone or you’ll be up way later than you want to. This will help you get up earlier, too, which in turn helps getting on a new sleep schedule.

What I mean by this is to make sure your flight across the pond is comfortable and cozy, so it’s much easier to fall asleep on the plane, which you want to do to get on a European schedule. Even though airlines provide a pillow and blanket, I always bring my own travel pillow and blanket because if I’m cold, I won’t sleep. I end up using the airline pillow under my lower back and use their blanket for extra warmth. Don’t forget socks! For an even easier time, book yo fine self a business-class or first-class ticket! Those reclined beds are amazing.

Essentials to Fall Asleep on a Plane

I’m not here to promote prescription drugs but taking a sleeping pill, or even a melatonin, right as you take off is KEY! I popped half of a sleeping pill right as we hit the air. Don’t make the mistake of taking it before your flight takes off because if your flight gets cancelled or delayed for any reason – you could be seriously screwed. Timing is key here peeps, take it when the flight starts. It was a light enough dose that it started to make me pretty sleepy right after I ate the flight meal and I was able to cozy up and pass out until we landed, which was 9:00AM Dublin Time. A new day! This is the first trick into telling your mind that you’re on Euro Time. Once we landed, we dropped our bags at our hotel (note: most flights from US land in the mornings so call ahead and request an early check-in), grabbed a coffee and hit the ground running.

You are going to want to take a nap your first day in Europe so badly, but you have to absolutely fight it with all of your might or you’ll 100% lose the fight against jet lag. Around early afternoon we started to fade so instead of heading to the hotel to nap, we powered through and walked around Dublin to explore. Not gonna lie, we were dragging a bit, but we did it and it helped a lot to fall asleep at a reasonable hour that night. Another trick is to force yourself to eat at mealtimes. My appetite was a little off but when it was mid-day, I made myself eat something light, even though my appetite was still on Mountain Time which at that time was middle of the night. Which leads me to my next tip….

This one is huge and I think helped me the most. Instead of comparing what time it is back home, just tell yourself what time it is RIGHT NOW, wherever you are. Try not to think “I’m not hungry because it’s only 4am back home”, that screws with your mind. Instead try….”it’s dinnertime here, I should eat something now”. Don’t look at your time zone back home or even ask when you call home. I spoke to Adamo a few times during the trip and even though I knew it was early morning for him, I refused to let him tell me what time it actually was. Trick your mind to being completely present. Which, lessss be honest, is the magic of traveling so try to do that anyways 😛.

After exploring all day and not napping, we were ready to hit the hay early. I was NOT hungry come dinner time but again, we pushed through and made ourselves go get an easy early dinner. Around 9pm Dublin Time, I took the other half of my sleeping pill to get on schedule there. It took me a bit to fall asleep but I eventually did and woke up feeling super refreshed. This tricks your mind and body into a better circadian rhythm which makes for a better night sleep. By fighting the nap earlier, you are definitely ready for bed. And again, avoid scrolling on your phone or watching TV.

We booked our flights to land back in Wyoming in the evening, which helped because I slept a bit on one leg of my flight. But because of the long travel day I was pretty beat and fell asleep immediately after landing at 9:30pm on the flight back home. I set my alarm to wake up at my normal rise n’ shine time and again, made sure to fight a nap on this end of the trip too. I was lucky enough to keep my work load light for the day I returned and just casually went through emails – nothing too mentally stimulating or I would have been real pooped. If you need a sleeping aid for your first night back to get back on regular programming, go for it!

Shop My Faves for Flying Abroad 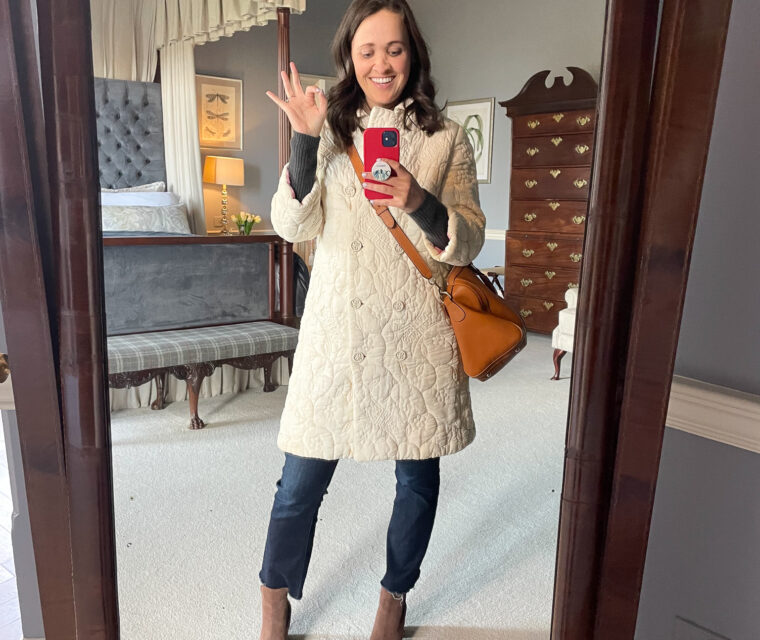